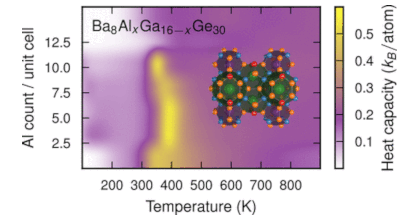 Inorganic clathrates have been extensively investigated owing to their unique and intriguing atomic structure as well as their potential as thermoelectric materials. The connection between the chemical ordering and the physical properties has, however, remained elusive. Here, this relation is uncovered through a combination of first-principles calculations, atomistic simulations, and experimental measurements of thermodynamic as well as electrical transport properties. This approach is, specifically, used to reveal the existence of an order– disorder transition in the quaternary clathrate series Ba8AlxGa16-xGe30. The results, furthermore, demonstrate that this phenomenon is responsible for the discontinuity in the heat capacity that has been observed previously. Moreover, the unusual temperature dependence of both Seebeck coefficient and electrical conductivity can be fully explained by the alterations of the band structure brought about by the phase transformation. It is finally argued that the phenomenology described here is not limited to this particular material but should be present in a wide range of inorganic clathrates and could even be observed in other materials that exhibit chemical ordering on at least one sublattice. Heat losses are an inevitable consequence of any energy conversion process, dictated by the second law of thermodynamics. This not only leads to an eternal s... 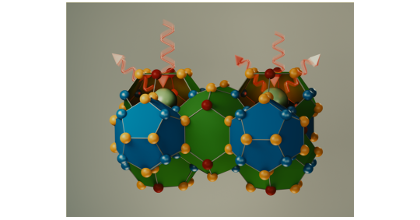 Many thermoelectric materials are multicomponent systems that exhibit chemical ordering, which can affect both thermodynamic and transport properties. Here, ... Recently there has been an increased interest in quaternary clathrate systems as promising thermoelectric materials. Owing to their increased complexity, the... 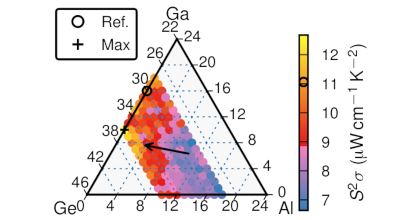 While alloying is a powerful handle for materials engineering, it is an ongoing challenge to navigate the large and complex parameter space of these material...