Plasmon-induced hot-carrier transfer from a metal nanostructure to an acceptor is known to occur via two key mechanisms: (i) indirect transfer, where the hot carriers are produced in the metal nanostructure and subsequently transferred to the acceptor, and (ii) direct transfer, where the plasmons decay by directly exciting carriers from the metal to the acceptor. Unfortunately, an atomic-level understanding of the direct-transfer process, especially with regard to its quantification, remains elusive even though it is estimated to be more efficient compared to the indirect-transfer process. This is due to experimental challenges in separating direct from indirect transfer as both processes occur simultaneously at femtosecond time scales. Here, we employ time-dependent density-functional theory simulations to isolate and study the direct-transfer process at a model metal–acceptor (Ag147-Cd33Se33) interface. Our simulations show that, for a 10 fs Gaussian laser pulse tuned to the plasmon frequency, the plasmon formed in the Ag147-Cd33Se33 system decays within 10 fs and induces the direct transfer with a probability of about 40%. We decompose the direct-transfer process further and demonstrate that the direct injection of both electrons and holes into the acceptor, termed direct hot-electron transfer (DHET) and direct hot-hole transfer (DHHT), takes place with similar probabilities of about 20% each. Finally, effective strategies to control and tune the probabilities of DHET and DHHT processes are proposed. We envision our work to provide guidelines toward the design of metal–acceptor interfaces that enable more efficient plasmonic hot-carrier devices. 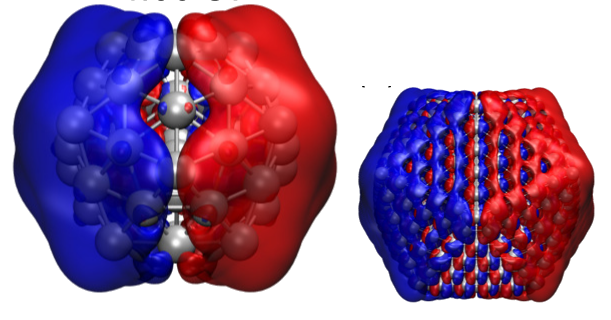 The real-time-propagation formulation of time-dependent density-functional theory (RT-TDDFT) is an efficient method for modeling the optical response of mole... 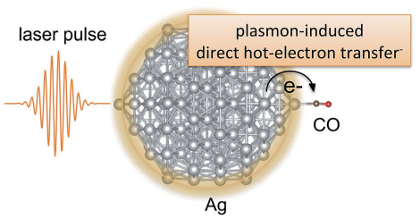 Plasmonic metal nanoparticles can concentrate optical energy and enhance chemical reactions on their surfaces. Plasmons can interact with adsorbate orbitals ... 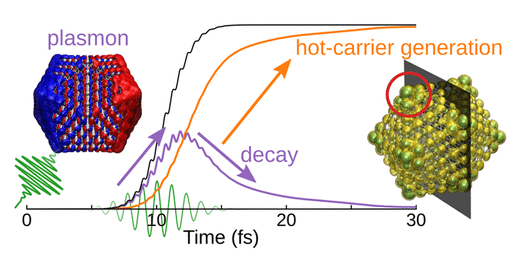 Metal nanoparticles are attractive for plasmon-enhanced generation of hot carriers, which may be harnessed in photochemical reactions. In this work, we analy... 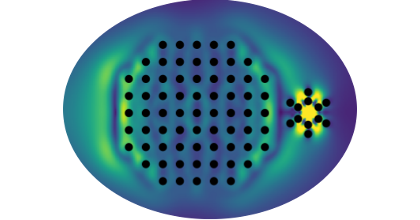 Strong light-matter interactions in both the single-emitter and collective strong coupling regimes attract significant attention due to emerging quantum and ...