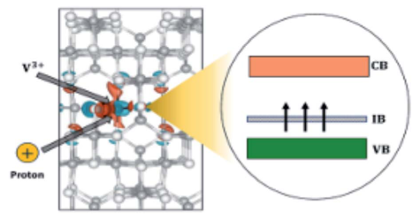 Generation of metallic intermediate bands (IBs) in a semiconductor material is a key challenge for increasing the efficiency of solar cells. The formation of a partially filled IB inside the band gap of V-doped In2S3 (In2S3:V) was first predicted by first principles calculations, based on density functional theory (DFT) [Palacios et al., Phys. Rev. Lett. 101, 046403 (2008)]. It is well established, however, that DFT severely underestimates the band gap and overestimates the exchange coupling constant of semiconductors and insulators. As a consequence, predictions of impurity-induced gap levels and their splitting can be flawed. In this work, we revisit In2S3:V, using a band gap corrected method (hybrid functional) and explain that the optimistic but erroneous DFT-predicted partially filled IB was caused by neglecting the strongly correlated nature of d-electrons and the present Jahn–Teller effect. Furthermore, recalling the fact that transition metals embedded in semiconductors tend to change their oxidation state, we analyze rehybridization of V d-orbitals with S p-orbitals for different oxidation states of the incorporated V. Our results demonstrate that in the presence of a reducing agent (for instance, H+), a totally filled IB can appear in In2S3:V. Successful operation of the IB solar cell is, however, strongly correlated to the metallic character of the formed IB, simply due to its ability in both receiving and promoting electrons through absorption of lower energy photons. Though, since this filled IB is non-metallic, these levels can act as active recombination centers and deteriorate the efficiency of device, which is opposite the primary goal of obtaining them. 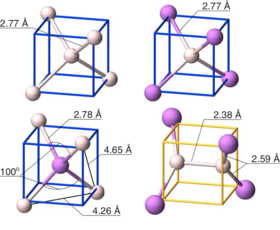 Calculations within density functional theory on the basis of the local density approximation are carried out to study the properties of intrinsic point defe... 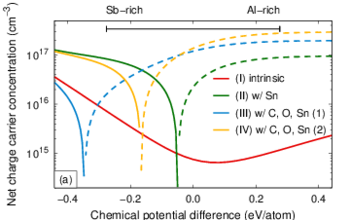