The interaction between energetic hydrogen and tungsten carbide (WC) is of interest both due to the use of hydrogen-containing plasmas in thin-film manufacturing and due to the presence of WC in the divertor of fusion reactors. In order to study this interaction, we have carried out molecular dynamics simulations of the low-energy bombardment of deuterium impinging onto crystalline as well as amorphous WC surfaces. We find that prolonged bombardment leads to the formation of an amorphous WC surface layer, regardless of the initial structure of the WC sample. Loosely bound hydrocarbons, which can erode by swift chemical sputtering, are formed at the surface. Carbon-terminated surfaces show larger sputtering yields than tungsten-terminated surfaces. In both cumulative and noncumulative simulations, C is seen to sputter preferentially. Implications for mixed material erosion in ITER are discussed. 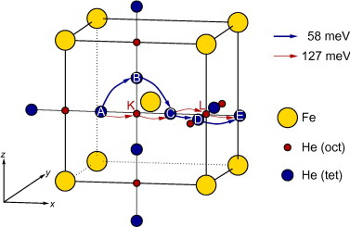 Ion-implantation is a useful technique to study irradiation damage in nuclear materials. To study He effects in nuclear fusion conditions, He is co-implanted...